skip to main | skip to sidebar

Elizabeth's going mad for console & computer games. She's started showing an interest in some Mario game we have for the Wii and she's been going on so much about the PS2 games she plays at the after-school club that we've bought an old console. Now she can regularly beat us at a couple of variants of Sonic.

When we're out she sometimes plays with her DS, though she's more likely to borrow Mum's iPod or my phone to play Angry Birds.

This morning she disappeared for half an hour. I found her in the dining room on the venerable PC that serves as a file/printer server, watching Bakugan movies on YouTube. Time for parental controls!

Posted by David McLaughlin at 4:17 pm No comments: Links to this post

M&S quality control ain't what it used to be 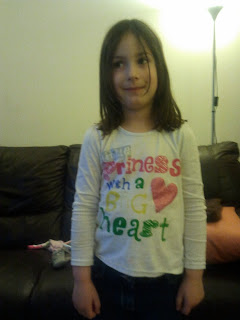 Can anybody see what's wrong here?

Posted by David McLaughlin at 6:03 pm No comments: Links to this post

Sent from my new phone.

Posted by David McLaughlin at 8:19 am No comments: Links to this post